Posted at 22:27h in Newspaper & Other Articles by Lawyerinauckland

Auckland house prices have outstripped Melbourne’s for the first time and reached the same level as Sydney’s only six months ago.

New figures from financial services provider UBS released by Labour show that at the end of the December quarter, average Auckland house prices were AUD$648,176, compared to Melbourne at AUD$634,890.

“Aucklanders know house prices are out of control. This proves it beyond doubt. Surely this will prompt Nick Smith to take some action on house prices,” he said.

“Owning a house is now out of reach for tens of thousands of Kiwis and loan to value ratios are making it even harder to save for a mortgage. With interest rates set to rise soon, it’s going to be even more difficult.”

Housing Minister Nick Smith said the prices had been affected by the change in the exchange rate “but even if you include the exchange rate, overall average house prices in Australia are higher than they are in New Zealand”.

“The broader picture of what’s going on and that is the New Zealand economy is going very well, the Australian economy is having its challenges, that’s changing the exchange rate and that’s having an influence on the exchange-rate-adjusted house prices on both sides of the Tasman.”

House prices were too high compared to income in New Zealand and the Government was working to address this through measures such as the housing accords to free up more land.

“It is going to take time and hard yards to improve that.”

He pointed to new statistics released today which showed 26 per cent more houses were built last year, 21,300, compared with 2012.
The Housing Accords were further speeding this up, he said.

“Housing affordability remains a very high priority and there will be new steps and new initiatives taken this year to support them.”

It was too early to say what impact the LVR restrictions were having but officials were encouraged by the drop in the number of house sales in December and the time the houses took to sell, he said.

These indicated the market was cooling but it was too early to say what impact this was having on price. 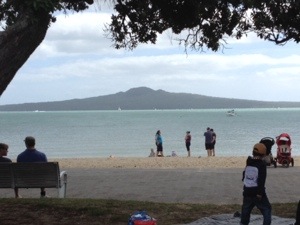